Holy Hell!! I cannot wait for this! Check out his amazing cover reveal for Penelope Ward’s February 24th, 2020 release! Is it hot in here?

The beginning of my sophomore year in college was off to a rough start.

On the first day of orientation, I had an altercation with an infuriating British dude. (In the men’s room. Don’t ask.)

I got home later that night and realized that the foreign student we were expecting to rent a room in my parents’ house was allergic to our cat.

So, the spare room went to someone else: Caleb—the British guy from the men’s room.

And so it began…my love-hate story with Caleb Yates. Or was it hate-love in that order?

The guy knew how to push every one of my buttons.

Sometimes I’d email him to express my aggravation and disdain.

He’d actually rewrite my own words and send them back to me.

That was the type of infuriating person Caleb was.

He eventually grew on me, and Caleb soon became one of my best friends that year.

Too bad he was headed back to England soon, so nothing could happen between us—for so many reasons.

I definitely couldn’t fall in love with him, especially since all we had was just one year.

What if vampires were a superior species and nearly undetectable? As successful, influential individuals, vampires live under a strict set of rules created by their government, The Cardinalis Order. Are you ready to understand what it means to break The Cardinalis Code?

When successful business entrepreneur Michael Chamberlain arrives in The Hamptons to take over his father’s nightclub, he’s in search of a new donateur, a contracted blood source. Troubled and distant, Michael discovers he’s still very much alive when enticed by a beautiful woman, offering a kiss and a question: Can you be mine for five minutes?

Student Paislee Sullivan serves at the prestigious nightclub to pay her tuition. When she meets the mysterious Michael Chamberlain, who she believes to be just a gorgeous bartender with an attitude, she soon discovers her world is ruled by a species not of her own.

Wealth and glamour shroud a dark side that threatens her life when she signs Michael’s contract. In this steamy romance, two lovers wield a charming relationship that will be destroyed by the Order if she breaks just one rule. 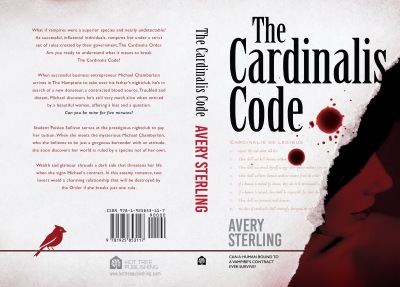 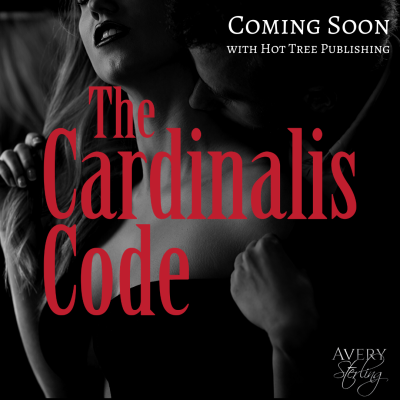 Avery grew up in a military family and traveled extensively. Fortunately, her books could travel anywhere with her. She adored romances as a teen and read whatever ones she could get her hands on. When she was sixteen, she decided to create her own love story, inspired by all the authors she’d been reading. She discovered her passion for writing and continued building her craft throughout the years while traveling as a military wife. Avery finally settled in a small town in Maine and decided to actively pursue her dream of becoming a published author, to share her stories with others in hopes they would love them as much as she did.

She’s served tables, worked drive-thru, modeled, attended AIMT in Kailua to learn massage therapy and energy work, even owned her own shop, making candles, soap, and other natural beauty products. She’s dabbled in a variety of things, but her love for a good romance never wavered.

Avery’s usually hanging out with her family, drinking coffee, and listening to music. If you don’t find her there, she’s staring out the window, swept up in another world. Avery feels strongly that every romantic journey she creates should have elements of adventure, sweet banter, danger, tension, gripping content —and of course, all that steamy romance! Her desire is to bring the reader along for a wild ride that leaves them breathless.